Somewhere between the hustle, bustle and excited and giddy overwhelming-ness that is NY NOW, we had a chance to sit down with Nicole Rimedio, the designer and founder of Variance Objects Jewelry and her partner Scott to learn more about their striking pieces and the path and story behind their success.

AurumEve: Jewelry has clearly been a consistent presence throughout your path, but most people don’t get as far as a Master’s in landscape architecture before pursuing it! Where you planning on using your architecture experience as a day job?

VarianceObjects: I’ve been making jewelry since I was a child. Jewelry was always what I loved- but perceived as a good hobby, and everyone always told me that. I thought I better go get a degree and professional job because that’s what you’re ‘supposed to do’. I went from studio art to architecture. I really liked the thought process of architecture, the conceptual thematic aspect that runs through every aspect of your design- but I didn’t like drawing or AutoCad. After I graduated I moved to New York and I worked at the Clay Pot. I loved the jewelry and realized I could make jewelry as cool as this! I then started learning about metals and taught myself how to solder and form, and started selling on the street in Soho on weekends. I loved it and did well; I made $1,200 in one Saturday once!  However, selling on the street was hard: carrying everything – and even harder in the snow. So…. quitting my job and selling jewelry didn’t sound feasible but {laughs} going to graduate school in California did! After I graduated, with the economy in bad shape, my architecture classmates were freaking out about job prospects – I was like you can have the architecture jobs! {laughs}

I started taking jewelry classes, and one day I was randomly walking by a junk shop and happened upon this cool, heavy table and I thought it would be a good work table- so I bought it. And one morning, I was playing around with a piece I had made from a class and all of a sudden – I had the whole line (Variance Objects) visualized, not quite articulated, but I knew – this is what I’m doing.

I didn’t know why it was so beautiful – it just was.

The experience is beauty.

VarianceObjects: (Scott) You have to tell her about the restaurant story! {Scott and Nicole laugh)

VarianceObjects: (Nicole) At 14 We were having lunch in this restaurant in Paris right by Oscar de la Renta’s store and I was wearing an outfit – a skirt and blouse that I had made. I had been making clothes for a while. I happened to be sitting next to Oscar de la Renta’s table. He actually turned to me during lunch and said “You made your own clothes, that’s very good, keep going!”- At the time I remember thinking “Oh God, I wish he had seen another outfit, this was nowhere near the coolest thing I’ve made!”  At 14 to get positive feedback from Oscar de la Renta…the pressure!!! 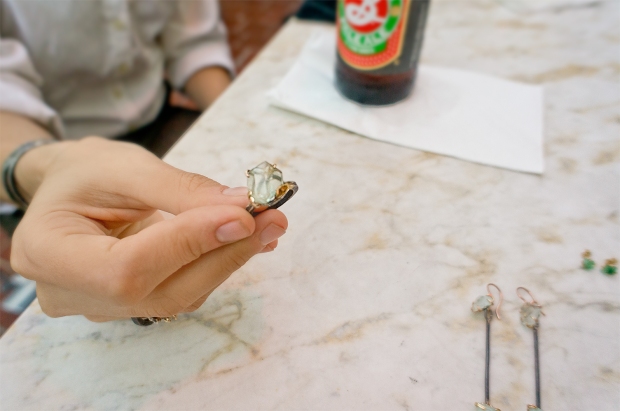 AurumEve: We’re in the middle of this wonderfully significant movement towards going back to and valuing natural form/beauty and sustainability, with California and NYC at the forefront. You’ve been aesthetically inclined from the beginning of your process, with your steampunk pieces many years ago. How do you look at the movement now, as someone who was doing this before it was ‘cool’?

VarianceObjects: I think it’s great. More than anything it’s an affirmation that I’m on the right track. It’s good, I like it. I just have to continue to do my best work.

AurumEve: How are you inspired?

VarianceObjects: I’m inspired by rediscovery and redefining what is considered fine jewelry.

AurumEve: I am with you 100%! With AurumEve, we look to give light to jewelry that is not traditionally seen as “fine jewelry”, but is in fact when you factor the skill, aesthetic and process!

Unlike the vast majority of jewelers, Nicole both cuts her own stones and sets her pieces, with the artistic acknowledging vision of the synergistic relationship between the cutting of the stone and setting – a relationship that is often separated into two professions in the traditional jewelry production sphere.

Cutting is an integral part of the setting process Nicole shares – “How do you really know how you’re going to set a stone if you’re not cutting it?”

AurumEve: Having just officially launched in 2013, how have you managed to move so fast and create such a strong, clean and inviting presence in retail, tradeshows and online- on this significant level?

VarianceObjects: Part of it is us being a team; so one of us doesn’t have to do everything. It frees us up to move faster and we’ve gotten some good support and some great orders and we continue with that momentum.

AurumEve: Is it just you creating every piece?

VarianceObjects: It started out with just me, and now I have a part time assistant.

AurumEve: What do you mean when you say you keep your stones “semi-raw”?

VarianceObjects: We often leave part of the natural faces or edges and inclusions – we sometimes will facet only half of the stone so that the natural beauty of the stone shines through, or a version of it. We get a lot of stones that have a really beautiful natural surface texture. It’s a nice contrast between the shiny face and the rough edge, and you can really understand it as a stone this way.

Why is something that is beautiful have to be completely stripped?

AurumEve: I love the lariat; it’s beautiful, but stands out so differently from anything else in the collection. Is it a new direction, or a test piece?

VarianceObjects: {Scott and Nicole laugh} We actually started with the lariat! It’s going to come back. I was thinking of ways to wear jewelry in a different form. Something you could dance with, something with a sensual appeal and use, something that you could wear like clothing, do whatever you want with. Something that could be worn in multiple ways that was strong for multifunctional wear throughout the day. And then it became more simplified with each version over time – resulting in what you see now, and more will come after the current collection.

AurumEve: Is there a special piece of jewelry that has been significant in your life or process?

VarianceObjects: The ring that Scott gave me, before Variance even started is special for multiple reasons. It’s an 1860s Polki diamond. It looks like it may have originally been a stick pin or maybe even earrings and was converted into a ring. It really facilitated part of the development of Variance. It was and is a ring I knew I wanted to wear all the time that I knew I wouldn’t be able to always wear. It allowed me to really figure out in myself, what my stack of rings was. It was what enabled me to figure out in detail how I design and create rings that work with other rings that can also stand on their own. 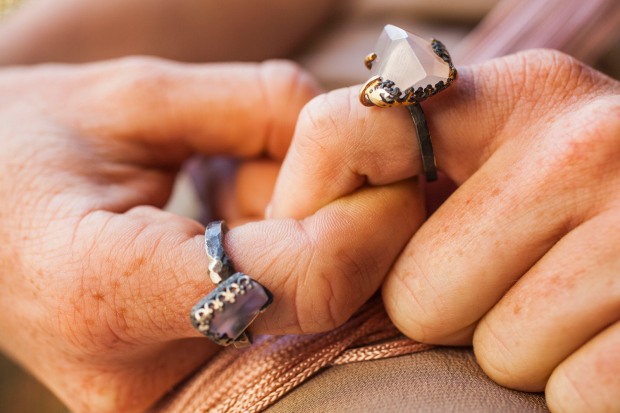 What do you think? Leave a comment :) Cancel reply